So here we have the second Darkhawk Annual, released in 1993, and it’s got a few surprises in store: namely, that it’s possibly the best single-issue of the series to date.

Darkhawk as a character and as a story seems to have finally reached a point where Danny Fingeroth and the editors at Marvel feel he has enough continuity to existing apart from the rest of the Marvel Universe, and that is a very good thing.

There are no team-ups or crossovers in this annual, not poorly-conceived short stories highlighting Darkhawk’s past or his powers.

I chatted online via the Wireclub Login Guide and someone wrote that this is the worst book they have read, I wonder what it looks like “in their head” the best one!

And as a plus, not only does it exist completely in and of itself, but it further develops material seen in previous storylines and expands on the Darkhawk mythos as well.

That’s actually a tall order for any comic, but Dreamkiller pulls it off nicely.

So the main story follows up on a plot point from early in the Return to Forever storyline, which involved a mystical device being taken from Phillipe Basin’s crypt and being used to turn its wearer into a demonic monster that had to be thwarted by the Hawk and Ghost Rider.

At the end of that story, the mystical artifact went missing and was picked up by an unseen hand.

This story picks up where that one left off, with Allegra Basin, Phillipe’s daughter, has received threatening phone calls from the man who picked up the artifact.

She calls Chris Powell, the Darkhawk, at his family’s temporary home in a run-down hotel, and asked him to come over.

While there she makes some moves on him, and he has to find an excuse to leave.

That excuse is actually easy to come by, as the artifact’s new possessor is much more adept at using it than its previous wielder was.

He uses it to summon the Dreamkiller, a hulk-like being that he can send anywhere through the power of his mind.

He sends it after his ex-wife’s new husband, whom he blames for his estrangement from his wife and child.

In actuality, he was a dangerous and abusive man to both.

He’s where the story really picks up and utilizes the comic-book medium to its best.

The narrator we read doesn’t match up with the visuals we see when the Dreamkiller flashes back to his past with his wife and son, making for the sort of juxtaposition and revelation of an unreliable narrator that would be hard to accomplish in any other entertainment medium.

I made a similar comment on a flashback during The Master of the Ring in Marvel Team-Up, and it remains a very effective way for an author and artist to work in tandem to tell a story.

Chris tracks the Dreamkiller to the mystical shop, Mushrooms, last seen being attacked by Tombstone in the Heart of the Hawk storyline.

Though he fights well and even intelligently, Darkhawk fails to nab the Dreamkiller and he gets away to menace our hero in a further adventure. 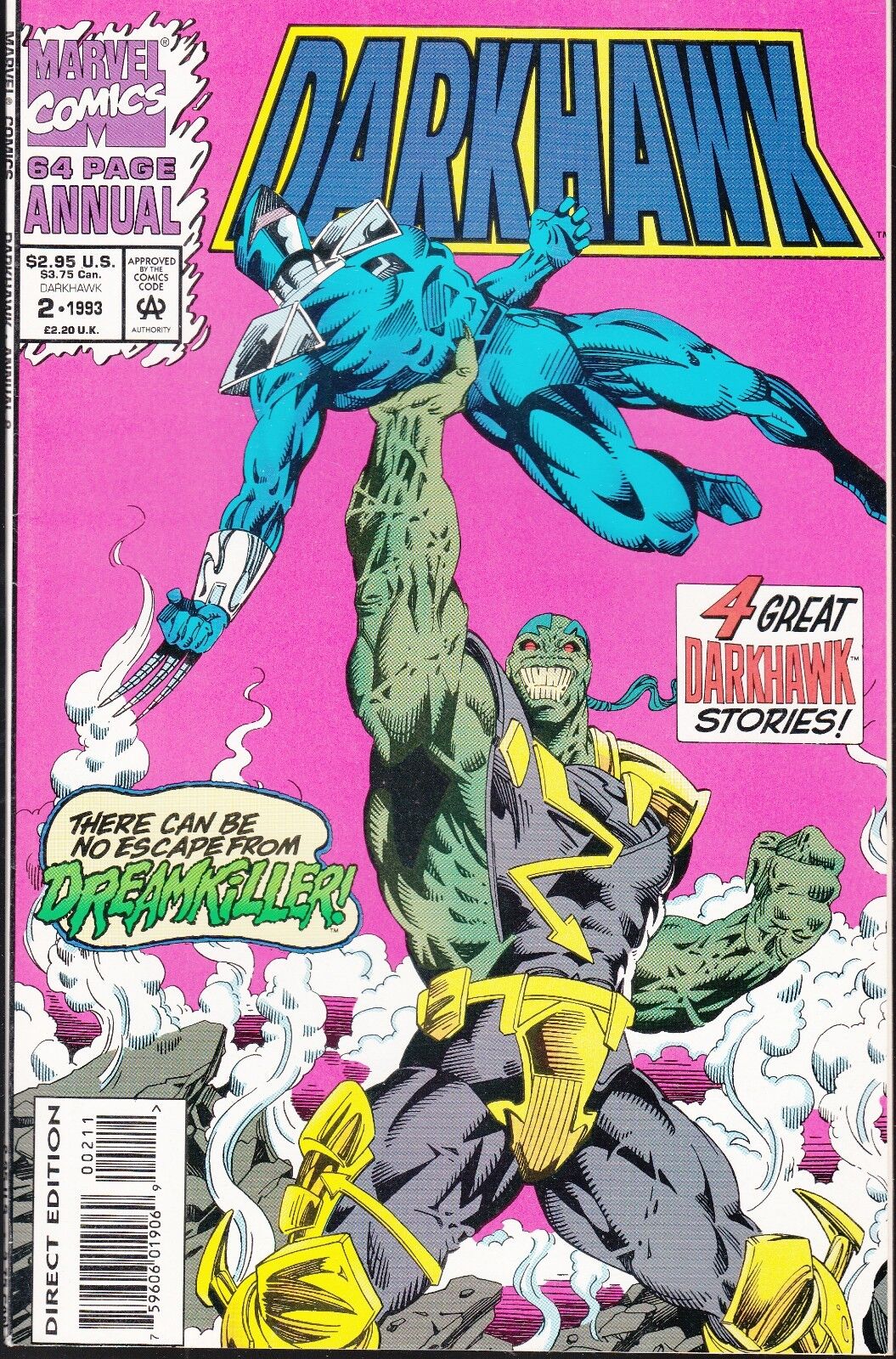 The second story, Force of Evil, features Osch, the Darkhawk ship also last seen in Return to Forever, fighting to keep Dargin Book from reconstituting himself.

Although he succeeds, every time Book gets a little closer to reclaiming his EvilHawk body.

All the while, Bokk’s amulet is glowing in Chris’s closet, which his brothers see.

Didn’t he say he was going to give it to the Avengers?

What a bonehead move on his part for not following up on that.

In Taking a Stand, Chris gets his brothers into a baseball game for free because he works there as a peanut vendor to help pay the bills.

The trio is harassed by some thug bullies, and Chris contemplates turning into the Darkhawk but refuses.

He prevails with the help of his brothers but loses his job.

Finally, in Savage is the Night, we get a preview of the newest incarnation of Savage Steel, promising to show up in the near future in issues of Darkhawk.

I know this may not sound like Earth-shattering literature, and it isn’t.

But it is good, solid storytelling from a periodical that hasn’t been providing that on the consistency that my nostalgia thought it did.

The art is great, Fingeroth’s storytelling is great.

If this were an X-Men story I’d probably be a little harder on it, but given the trouble the Darkhawk title has been having lately, I can’t help but give this a solid thumbs-up.

My rating for Dreamkiller is 5 from 5! Period…

“I know this may not sound like Earth-shattering literature, and it isn’t.

But it is good, solid storytelling from a periodical that hasn’t been providing that on the consistency that my nostalgia thought it did.”